Lexus RX-400H: No Transmission With Gears to Shift 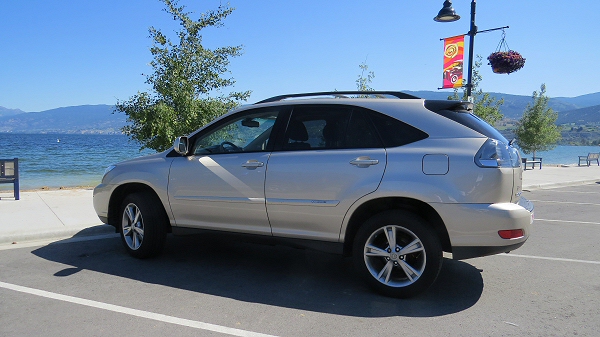 The CVT (Continuously Variable Transmission) in the Lexus hybrid drive system is one big reason these vehicles work so well and have a high reliability rating.

It does not use belts, cones or other systems that have significant wear points - just a clever arrangement of planetary gears that allows the electric drive motor (MG2) and the ICE (Infernal Combustion Engine) to apply power to the wheels simultaneously, in variable proportions.

The flow of power is controlled electronically by the Lexus Synergy system, which is why they refer to it as an eCVT.

Essentially, it controls the flow of current to the stator coils, constantly adjusting the electric output of MG 1 (Motor/Generator 1) as a generator (driven by the ICE) to charge the NiMH battery bank, or the output to the ICE as a starter motor. The same thing happens with MG 2 - it's a motor, driving the wheels, or a generator for the NiMh battery.

The first is a simpler explanation of the Toyota Prius Electronic Continuously Variable Transaxle (eCVT) model P112 for model years 2004-2009. It shows very clearly how the CVT transaxle system works. Watch this first if you aren't a mechanical engineer. 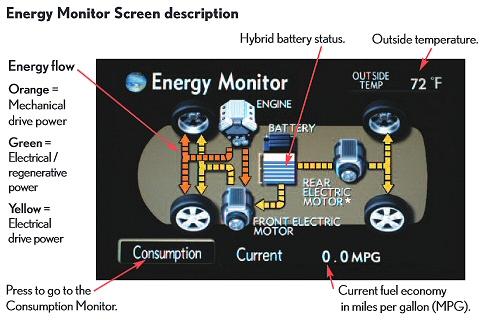 The CVT is controlled by the Lexus Synergy system, a powerful computer that controls all aspects of the energy transfer from the 4 motors. I call it 'The Decider'.

It boots up smartly when you turn the key; there is essentially no delay before it becomes operable, but that's because it is in 'sleep' mode when the key is out of the "ignition switch" (I guess that's an outdated term now).

This screen is constantly updating, revealing how the Synergy system is moving energy between the 3 electric motor/generators and the gas engine, transferring power to the wheels and back to the main high voltage battery. This is very helpful for learning how to drive it to get the best gas mileage, and it's very entertaining if you are a gadget guy like me!

The is a more compact version embedded in the speedometer that is not nearly as interesting, but still provides the basic info, if you don't have the touch screen option. 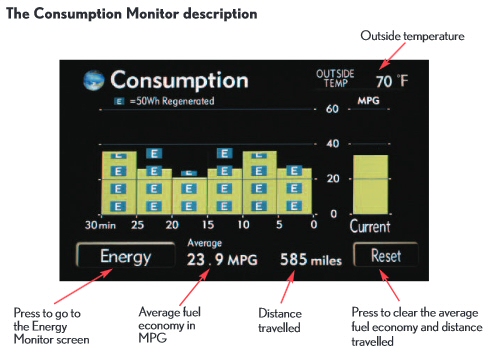 A finger press on the touch screen displays a second related screen called the 'Consumption Monitor', which analyses your overall consumption and efficiency, so that you can track your usage and maximize efficiency.

These displays provide easy to understand instrumentation, considering the complexity of what is going on.

If you're not into precision monitoring and just want to drive the damn thing, then relax, turn off the display, adjust the driver's side air conditioning, put on some music to enjoy with the 11 speaker sound system, and set the cruise control for your highway speed - it will take care of itself very nicely.