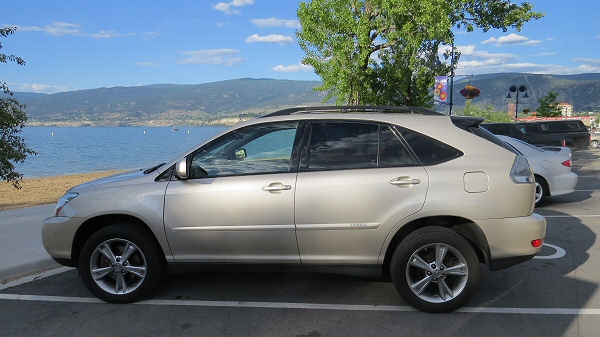 Our BC hot springs tour (an extensive road test for our new Lexus RX-400H Hybrid SUV) started with a Westjet flight from Comox on Vancouver Island to Calgary, in early June of 2015.

We decided on this particular vehicle in Calgary because it had the colors we wanted, the mileage was low, the condition was excellent, and the price was right.

It also came with the 'Ultra Premium' package which includes just about every available option, except rear seat DVD player and Adaptive Cruise Control (ACC).

I didn't care about the DVD (and later discovered the in-dash CD player was actually a DVD player), but I would have liked the ACC as it adds speed sync with the car in front to your regular cruise control. This was a very new technology in 2007, and it was very expensive at that time, so very few vehicles had it, although it is quite common (and affordable) on newer vehicles.

We also wanted to purchase from a reputable dealer that had already inspected it and made any necessary repairs.

The Westjet flight is a very pleasant scenic tour over the Province of BC and leaves at the very civilized time of 11:30 AM, taking a little over an hour for the start of final descent into Calgary. 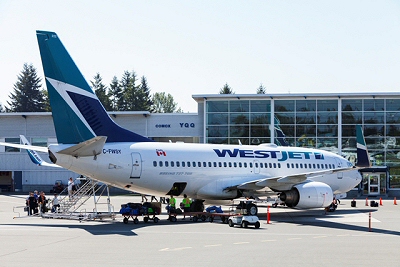 We have always liked this flight as the security inspection is quick and efficient, and the plane loads very quickly with front and rear doors open for tarmac loading.

There are no 'tugs' here - the captain fires up the jet turbines, rotates the plane 180 degrees right on the spot, and before you know it you're hurtling down the runway to rotation speed and subsequent lift-off. It is the fastest 'load and fly' I have seen anywhere with a commercial jet.

Westjet is our favourite airline; they are very friendly and efficient, and almost always on time. Their modern fleet of 737 Boeing aircraft are comfortable and fast, and if you have flexible flight times, their rates can be very affordable.

We often use this as our gateway for travel because from Calgary you can go anywhere in the world. The Calgary International airport is undergoing a huge $2.2 billion expansion that will make it larger than Vancouver in the coming years.

The airport at Comox is also huge, mainly because it is a somewhat unique situation where a commercial airline is allowed to share the runways of a military airport.

CFB Comox is the primary air defence installation on Canada's Pacific coast and serves as a forward operating base for temporary deployments of the CF-18 Hornet fighter-interceptor. It is also the home base for maritime patrol/anti-submarine aircraft and fixed-wing and rotary-wing search and rescue (SAR) aircraft.

Every April, Canada's fantastic aerial display team, the Snowbirds, practise at 19 Wing Comox and put on a spectacular show. One of the most amazing routines they do is the 'Maple Leaf' where they carve our national symbol right into the sky ... and while you're there you also sometimes get to see a squadron of CF-18 Hornets scramble at full military power. Buildings shake, the ground trembles and everyone stops what they're doing when that happens! 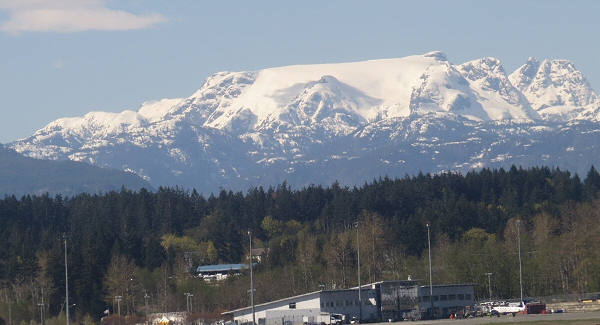 On clear days the views of Vancouver Island, the Salish Sea with its myriad collection of islands and inlets, and the Coast Range on the mainland can be quite spectacular.

In fact, the entire flight is very scenic as you pass over the mountains, valleys and enormous lakes of British Columbia.

One of my favourite shots (pictured) is the huge Comox glacier (the only one on Vancouver Island), adjacent to the Mt. Washington ski area, which gets one of the highest snowfall packs on the continent due to the winter storms coming directly off the Pacific Ocean.

We experienced somewhat of a time warp on this trip, as it took a little over an hour flying at around 600 mph at over 40,000 feet, before coming into final approach to Calgary, then 10 very long days full of awesome sights on our trip back to the Island.

As we land in Calgary, we can clearly see the Rocky Mountains jutting up from the foothills at the edge of the great plains, as seen in the picture below, taken on a winter day. They beckon us to begin the start of our driving adventure, and I wonder what handling the Lexus RX-400H hybrid over the mountain passes and through the valleys will be like. 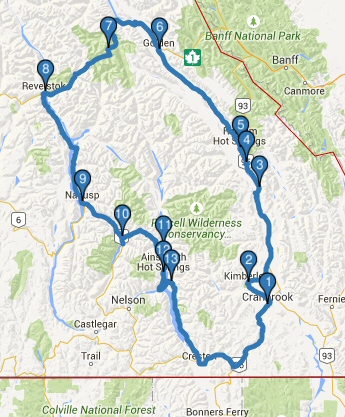